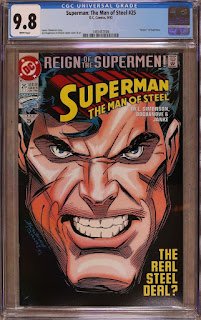 Joss Whedon has recently taken over the reigns of the upcoming Justice League movie after Zack Snyder stepped away for personal reasons. I'm not going to go into any details of those reasons, but if you're curious, a simple Google search will give you the info you're looking for.

Anyway, this blog isn't about movies, it's about comics. Key issue comics to be exact. The only reason I mentioned the movie above is because there is a lot of speculation that we may be seeing Henry Cavill don Superman's black suit in the film, and this is the comic where we are first introduced to it.

Back in the 90's, DC decided that they were going to kill off one of their most famous characters. If you were into comics back then, you probably remember all of the hype around this story line and probably even had a copy or two of Superman #75, the issue where Supes meets his fate at the hands of Doomsday. But, as we all know, in comics, nobody stays dead forever. 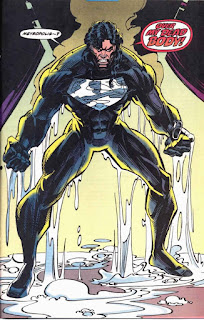 If you remember the Death of Superman, then you probably also remember the Reign of the Supermen story line that came out after that. In this story, that runs for several issues in several titles, there are for "Supermen" that are claiming to the be real Superman. One of the "Supermen" actually turns out to be evil and becomes the super villain in the story. I don't want to give too much away here, so I'll leave the identity of that character a mystery, for now anyway.

Regardless, at the end of this issue, a giant robot comes up out of the water, and two of the Supermen decide that it's there to destroy the city and go toe to toe with it, until they finally stop it. As this massive machine is disabled, a hatch or doorway opens up, and this man is basically birthed from it. On the last page, it is shown to be Superman, and he's in his black suit and sporting a great looking mullet.

Now that Supes has returned, he still has to prove to the world that he is the one true Superman. So the Reign of the Supermen story line goes through to The Adventures of Superman #500, where DC officially considers Superman to be back from the dead for good.


To the best of my knowledge and through my research, I could only find one variant for this comic, and that is the newsstand edition. Newsstand editions have become more sought out lately. As we got closer and closer to the millennium, these editions started to become a lot harder to find, making up only a fraction of the actual print run. At the time when this comic was released, it was only around 15%. As we got further along and closer to today, those numbers get even lower. Anyway, if you want one of these "rare" newsstand editions, click the pick and it with shoot you over to the current eBay listings.

The census for this book is really low at this time. To be honest, this isn't a really sought out key issue. In fact, it's probably still unknown by a lot of people, and the census numbers reflect that.

To date, there have only been 41 copies graded by CGC. Of those, 22 of them are graded a highest 9.8 NM/M. CGC doesn't differentiate between the Direct and Newsstand editions, so how many of each are out there is unknown.

If you're looking for a copy, I wouldn't go any lower than a 9.8. There are a few of them out there and they're still very affordable as you will see in the next section.


GoCollect, my go to site for comic values has only a few points of sales information data for this comic. In the two years worth of information available, values for this comic hasn't really gone anywhere. Back in 2015, you could snag a CGC Universal 9.8 NM/M copy for only $75. The last sale on June 16th went for only a few dollars less at $62. So, as you can see, there isn't a lot of demand for this minor key issue and you can still snag a copy for well under $100.

Now if you really want to add this comic to your collection on the cheap, you can take a gamble on a raw copy. If you have a good enough eye, you may be able to snag a copy for damn near cover price, which was only $1.50. But be warned, if you send in a copy thinking it's a 9.8 NM/M and it only comes back from CGC/CBCS a 9.6, you'll have lost money. It would cost you more to get it graded than the book is worth. Either way, good luck and happy collecting. 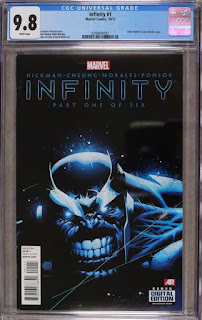 The Black Order being in the upcoming and highly anticipated Avengers: Infinity War is kind of old news now, but it's still news. So, I'm going to try to pump out at least two more key issues relating to them before the film is finally released in 2018, which should give me plenty of time.

I'm not sure how many of the five members of the Black Order are going to appear on screen. There has been somewhat confirmed rumors that Corvus Glaive will be making an appearance, but from looking at the IMDB cast list, there is only one reference. It would appear that Terry Notary, a motion capture actor, is list as playing Cul Obsidian, which is another name that the Black Order goes by. Whether he's going to be playing one member, or all of them, remains to be seen.

Supergiant is one of the five, the five referring to the Black Order, whose members also include Corvus Glaive, Ebony Maw, Black Dwarf, and Proxima Midnight. Supergiant has the ability to read and control the minds of others, but they don't really go into what she can do in this issue, since she only appears in one panel. She does reek havoc with Black Bolt's mind in a later issue though. Unfortunately, she doesn't make it through to the end of the series and is eventually killed of in Infinity #6, but that a whole different key issue that I will get to....at some point.

Variants
Variants, variants, and more variants. There's just too many variants for this issue to talk about every individual one, so I'm simply going to list them below with a picture of the cover for reference. If you're interested in adding one of these variants to your collection, click on the picture and it'll take you to the eBay listings for that cover.

Census
If you add up all of the census numbers, for all of the variants, there haven't been very many copies of Infinity #1 graded by CGC. In total there have only been 531 that have gone through CGC's grading room to date.

All of these copies are, of course, in very high grade. That happens a lot with newer comics. There are many comic investors out there that buy the latest copy of the newest comic, bag and board it, and sent it directly to CGC or CBCS. These comics were never read, and hardly ever touch by human hands, hence there are many, many high grade copies out there.

I have a feeling that these census numbers will go up, but I have no idea how much. This comic doesn't seem to be in high demand, at least from looking at the eBay sold listings. The ones that are selling the most seem to be the variant covers.

Values for this comic obviously are going vary depending on which cover you are looking at. When we look at the sale data for the first printing of this comic, values haven't really changed much from when it was first released in 2013, as you can see on the chart to the left. It usually sells in the $20 - $50 range for CGC Universal 9.8 NM/M.

Some of the more valuable covers are the Adam Kubert Sketch cover and the Marko Djurdjevic 1 in 200 retailer incentive cover, with the latest sales for both reaching $200 and above. And the Art Adams 1 in 150 Hero Sketch and Mark Brooks Deadpool Sketch have both sold for well over the $100 mark for each of those variants. Sales figures for all of these variants are for 9.8 NM/M copies. The only copy that might be worth getting in grades below that may be the Djurdjevic cover, but I would probably only go as low as a 9.6 NM+.

Now, to be honest, there isn't a lot if sales data to see where these comics are headed in terms of investment potential. Since there are so few graded at the time, there won't be a lot of sales. It doesn't seem like this is a high demand comic at the moment and there are a lot of raw copies out there to buy. If the entire Cul Obsidian end up appearing in the upcoming Infinity War movie, then this comic just may see a bump in demand. I guess we'll just have to wait and see if there is any confirmation of any of the other members of the Black Order appearing in the future, other than Corvus Glaive who looks like he's definitely going to make an appearance. But, until that day comes, happy hunting.