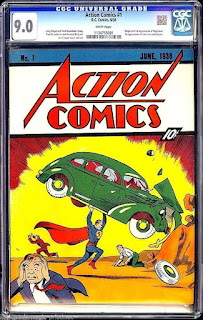 Back in 2014, pristinecomics.com put this beast of a comic up for auction on eBay. I remember seeing it being advertised months before the auction started. There was advertising for it everywhere. I especially remember seeing the ad in the 44th edition Overstreet Price Guide when it came out. It was really big news in the comic world because you almost never see this comic at this grade available for auction. So far, there are only 3 copies of Action Comics #1 on the CGC census graded at 9.0 VF/NM, but only two of those have a blue Universal label. The third is a restored copy. There are no copies graded above a 9.0.


I had the auction on my eBay watch list purely out of curiosity. There is no way a poor working guy like me could ever afford a comic of this magnitude. Finding an Action Comics #1 in any grade is gonna be up there in price and probably well out of my price range. When the auction ended, I was amazed at how much this copy ended up selling for. Over 3.2 million dollars. The last time the a 9.0 VF/NM first appearance of Supes was up for auction was in 2011. This copy has become known as the Nicholas Cage copy. It sold for 2,161,000.00 which was a record at that time. That's over a million dollars less than this latest sale. This is definitely an investment worthy comic for those who can afford it. I can't imagine how much it will go for the next time it comes up for auction, whenever that may be.

- ComicLink - MyComicShop - ComicConnect
Posted by Graded Key Comics at 9:44:00 AM